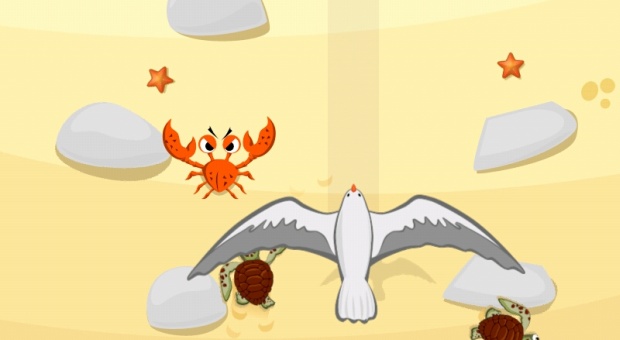 I was not sure if I should implement it because I thought that it would make the game too hard, but… it’s actually funnier! (yes, harder too)

So here we have the 2nd enemy of the game: Seagulls! They will fly over the area from time to time, and if any turtle is in their path, it will be captured & carried away 🙁

When a seagull is going to appear on scene, an icon flashes for a couple of seconds pointing at the direction it’s coming from. Then, an overlay shows the path the seagull is going to follow across the screen, from the bottom to the top. Have a look at the screenshot above to understand what I’m describing here (notice: the icon is not visible in that image).

These past days I’ve been working hard on implementing this new enemy and adding a “How to play” screen, as well as adding music and sound effects. The game is reaching its final stages now 🙂