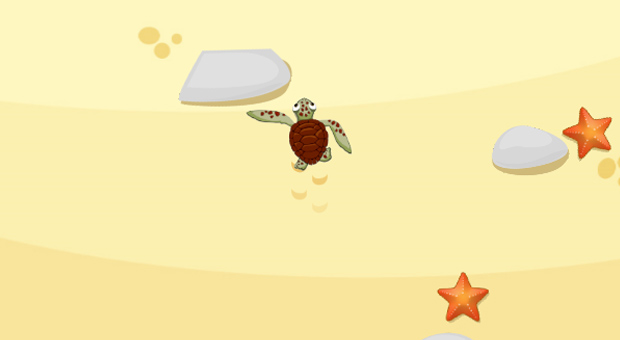 So, let me introduce you the first game I’m working on: Save Sea Turtles!

This is going to be an Android game, specifically targeted towards tablet gaming. I’ll try to fit it as well on phone resolution once it’s done, but for now it’s being developed with a big screen in mind.

After several tests I decided to start small and go for a simple, fun game. I wanted to use the touchscreen beyond 2 virtual sticks, creating a physical interaction between the player & the game. Having virtual sticks controlling your character is a nice solution if nothing else works, but I think that touch devices are a little underused by a lot of games that simply throw a virtual stick in there instead of rethinking how to use the device hardware.

I’ve been working on & off on this game for a while now, but progress is slow since I’m learning a lot of new things while developing it; Unity3D in general, and several frameworks to deal with 2D graphics.

Regarding 2D frameworks, a quick word on my choices: I started with RageSpline which is great but lack of animation pushed me to buy a copy of SmithMicro’s AnimeStudio and start animating outside Unity, then exporting as PNG’s & then using another 2D framework to work with those frames inside Unity: ex2D.

ex2D is a great and powerful extension, but a little more in-depth documentation would be appreciated. Video tutorials are available but outdated (things have changed since the early version you can see in the videos), and online wiki & documentation is sparse. All of this is compensated with great support by its author on the unity forums but I much prefer something I can quickly search & read rather than having to ask a question on a forum & wait for an answer. Anyway, I absolutely recommend it if you are looking for a complete 2D framework for Unity, you’ll sure find your way through the eventual problems you find.

So this is it for now, further details are coming soon